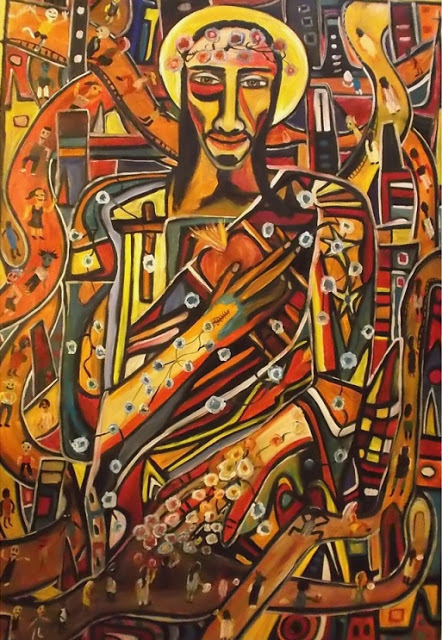 In the New Testament reading for Morning Prayer today, Paul speaks to the Jews in Rome: “It is because of the hope of Israel that I wear this chain,” he says (Ac 28:21). They reply to him, “we desire to hear from you what your views are, for with regard to this sect, we know that everywhere it is spoken against.” (v 22). When the day came, they gathered in huge numbers to hear Paul and he spent all day “testifying to the kingdom of God and trying to convince them about Jesus both from the Law of Moses and from the Prophets.” (v 23). Some were convinced and some were not (v 24).

The well-known Christmas Carol, “Hark the Herald Angels Sing,” written by the eighteenth century evangelists Charles Wesley (1707 – 1788) and George Whitefield (1714 – 1770) reveals the difficulty. It is a rousing celebration of the birth of the long-awaited king: “Joyful, all ye nations rise, join the triumph of the skies.” Rejoice, the great king is born. “Hail the heaven-born prince of peace! Hail the Sun of righteousness!” This is exactly what the Jews were expecting. The glorious arrival of the messianic king. So why were they not all jumping for joy and signing on?

In the middle of verses 2 and 3, their difficulty is revealed. “Veiled in flesh the godhead see.” “Mild he lays his glory by.” His glory is muted. He left it behind. He was “pleased as man with men to dwell, Jesus, our Emmanuel!” He came as a man to dwell with us, not in glory and power, but hidden in the form of a human being. He was God with us. This was not at all what the Jews expected. They wanted the Messiah to come in great power and lead a conquering army to establish them as the preeminent nation on earth. But, sadly for them, that is not why he came. “Born that man no more may die, born to raise the sons of earth, born to give them second birth.” He did not come to conquer, he came to save.

This is such a remarkable story, it sounds ridiculous. God becoming man, that’s absurd. How is it even possible? How could the Almighty God ever fit into the womb of an ordinary, normal-sized young woman? Only by giving up an infinite amount of his glory and majesty and power. But what God would do that? “Mild he lays his glory by!” It’s unthinkable.

The Jews disputed amongst themselves as they pondered on what Paul was saying (v 25) and they obviously left in a huff when he paraphrased Isaiah 6:9-10 to them: “You will indeed hear but never understand, and you will indeed see but never perceive. For this people's heart has grown dull, and with their ears they can barely hear, and their eyes they have closed;” (v 26-27). Paul then prophesies against his own people: “Therefore let it be known to you that this salvation of God has been sent to the Gentiles; they will listen.” (v 28). Actually, I’m not sure we listen any better than the Jews did!

The incarnation is mind-shattering, life-altering stuff. To listen is to have our lives turned upside down. The God who “Laid his glory by” so easily, so casually (Phil 2:5-11), calls his followers to the same kind of sacrificial servanthood (Mark 10:42-45). It is good for us to consider during this Advent season the enormity of what God did. It reveals his character like nothing else. What love would drive such an extreme level of self-sacrifice? It is also good for us to consider whether, like many of the Jews listening to Paul, we too dispute with our ears blocked and our eyes closed? Do we embrace the magnitude and magnificence of this story? “Light and life to all he brings, risen with healing in his wings.” Hallelujah!

In His grace
Fr. Geoff