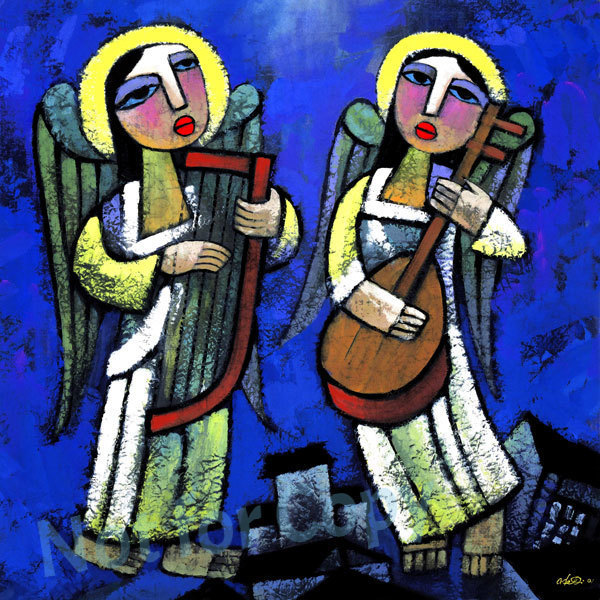 Richard Bauckham, “The Song of the Shepherds”

We were familiar with the night.
We knew its favourite colours,
its sullen silence

and its small, disturbing sounds,
its unprovoked rages,
its savage dreams.

We slept by turns,
attentive to the flock.
We said little.
Night after night, there was little to say.
But sometimes one of us,
skilled in that way,
would pipe a tune of how things were for us.

They say that once, almost before time,
the stars with shining voices
serenaded
the new born world.
The night could not contain their boundless praise.

We thought that just a poem —
until the night
a song of solar glory,
unutterable, unearthly,
eclipsed the luminaries of the night,
as though the world were exorcised of dark
and, coming to itself, began again.

Later we returned to the flock.
The night was ominously black.
The stars were silent as the sheep.
Nights pass, year on year.
We clutch our meagre cloaks against the cold.
Our aging piper’s fumbling fingers play,
night after night,
an earthly echo of the song that banished dark.
It has stayed with us.
——
Richard Bauckham begins this poem inviting us to imagine deeper the Christmas story. In Luke 2, we have one sentence to give us the context that shepherds were out doing their shepherd-ly task the night Jesus was born. And in this poem, we pause there. Often times, those of us familiar with the Nativity story can easily rush along. In its introductory sentence, not only do we get a chance to imagine the lives of these shepherds more, but are written in such a way that we too, can identify with them. In various ways and at various times, we too are familiar with ‘the night,’ and the isolation it brings.

Like the shepherds, I too find myself (more often than not) in an ordinary space. For a shepherd, the ordinary, un-extravagant thing is to take care of sheep. For a student like myself, the ordinary, un-extravagant thing to do is to read books, write papers. The shepherds recount a time that there was something extraordinary, but accredit it to being ‘just a poem.’ Whether intentionally or not, I can do the same thing. When I hear of how God has worked in the past, it’s easy for me to think that he doesn’t work in the same way anymore. But regardless of my feelings, or the feelings of these shepherds, God does work.

Suddenly, the sky is filled with the heavenly host, and the shepherds describe how the world seems to finally be itself. This is the story of Advent, the Gospel: in the middle of our ordinariness, in the middle of our un-extravagant lives, God appears. Often times, I feel like I need to do great things for God, in order to encounter his work in the world. But the reality is, God is present, and he is at work, and he seeks to meet you and I where we are. That is the story of the incarnation. Christ comes down to earth, as a human, in an ordinary, un-extravagant manner.

Like the shepherds, God shows up in the middle of our ordinary work. We practice our ability to see him better with seasons like Advent and Christmas. Because, just as in the poem, not only are we invited to imagine the lives of these shepherds, but in doing so, we are invited into the story itself. No longer is waiting for the Messiah a long off event. No longer is the Nativity a point in history that happened long ago that we have to wish and imagine ourselves to be a part of. In the season of Advent and the season of Christmastide we are invited to participate in the re-telling and the re-living of this story in our lives today.

Image: He Qi, 'The Song of Angels'