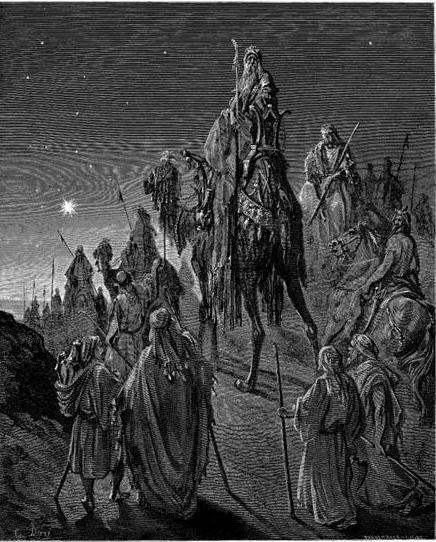 J.R.R. Tolkien may not have written a Christian allegory when he composed The Lord of The Rings, but the epic story is undoubtedly a Christian tale. As with all great quests, the journey of Frodo and his companions into darkest Mordor is an Advent journey. It is a mission of hope in a hopeless world and of light in the midst of utter darkness. Tolkien was careful not to draw strict Christian parallels, but we need not be so cautious ourselves as we read in The Lord of the Rings.

Consider the following scene from near the end of the journey. Sam and Frodo are in Mordor, with the task before them seeming increasingly impossible. One night, Sam looks to the sky and observes a star, a sign of hope,

"Far above… the night-sky was still dim and pale. There, peeping among the cloud-wrack above a dark tor high up in the mountains, Sam saw a white star twinkle for a while. The beauty of it smote his heart, as he looked up out of the forsaken land, and hope returned to him. For like a shaft, clear and cold, the thought pierced him that in the end the Shadow was only a small and passing thing: there was light and high beauty forever beyond its reach. His song in the Tower had been defiance rather than hope; for then he was thinking of himself. Now, for a moment, his own fate, and even his master’s, ceased to trouble him. He crawled back into the brambles and laid himself by Frodo’s side, and putting away all fear he cast himself into a deep untroubled sleep.” (The Return of the King, book 6, chapter 2, “The Land of Shadow”)

In these long, last days before Christmas, the shadow of hopelessness looms over us all. On the face of things hope often seems foolish, perhaps even dangerous. These darkest days of December are an image of the dark days at the end of an age. Certainly, at the turn of the first millennium, in Judea, things were very dark indeed. Israel was controlled by the occupying Roman power and the glory of the Lord had not returned to the temple. The hope of a Messiah was flickering, if not entirely extinguished, in the minds of many.

There were some, like Simeon (Luke 2:25-35) and Anna (Luke 2:26-38) who held on to hope and who saw the Lord’s salvation in the infant Christ with their own eyes. There were also the Magi, who ‘saw his star when it rose’ (Matthew 2:20) and followed that light of hope all the way to the child Christ. Even in the darkness, these ones held on to the promises and signs of hope that they had received.

As we draw near the birth of Christ in these weary and dark days, let us hold onto the hope of Christ. Let us cling to the light that shines forth in the darkness.

The rising star is a sign of a new day, of light that casts out all darkness. Sam is right. “In the end the Shadow [is] only a passing thing.” It is the light that will endure forever.

Christ is the Alpha and the Omega, the Beginning and the End. While the darkness is very real, it is still shadow. And all the lingering effects of evil will be cast out by the overcoming light of Christ.

Image: Gustave Dore, "The Wise Men Guided by the Star"