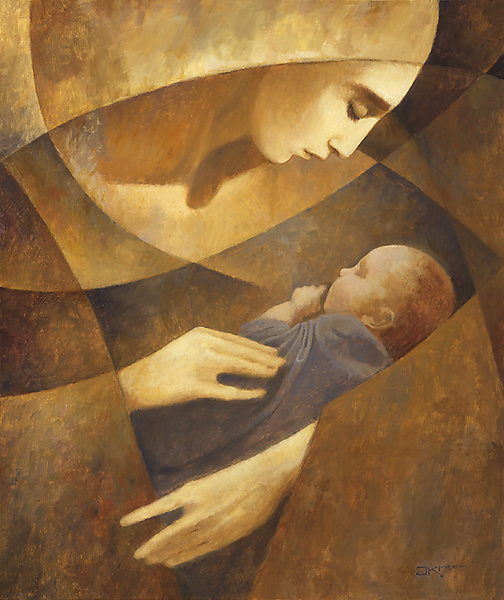 In sleep his infant mouth works in and out.
He is so new, his silk skin has not yet
been roughed by plane and wooden beam
nor, so far, has he had to deal with human doubt.

He is in a dream of nipple found,
of blue-white milk, of curving skin
and, pulsing in his ear, the inner throb
of a warm heart’s repeated sound.

His only memories float from fluid space.
So new he has not pounded nails, hung a door,
broken bread, felt rebuff, bent to the lash,
wept for the sad heart of the human race.

In this poem Luci Shaw invites us into a deeper imagination of Christ’s incarnation, his coming to earth. A wise person once said, “poetry isn’t poetry until it’s incarnated, which means spoken not read.” If you haven’t read the poem out loud, go ahead and do so.

Anyone who has held a newborn baby knows the sensation of awe and wonder and young life—compounded, as a parent with overwhelming love. At the beginning of this poem, we see described this infant Christ, tying our real world experience with the historic birth. But in the next stanza, I think we’re drawn in to ponder Mary. Her experience, holding God incarnate, her physical state, weak after labor but still giving herself as food for the Christ child. In those intimate moments of mother and child, I can’t imagine Mary loving anyone else in the world more than her Child, the Messiah.

Mary has often been called the “proto” Christian. She was the first person to say ‘yes’ to Jesus. Her response to Gabriel, “let it be to me according to your word,” (Luke 1:38 KJV) is a model prayer for all of us who follow God. Where Mary physically bears Christ into the world, we are invited to be the ‘Christ bearer’s’ in our own life.

So what does this have to do with Advent? Well, as any mother can tell you, pregnancy is a type of advent. It is a season of waiting, preparing, hoping, expecting. In that sense, Mary was the first to ‘celebrate’ advent, while waiting for the birth of Jesus. It’s during that pregnancy too, that we have the ‘Magnificat’ (Luke 1:46-55) written. If Mary is the kind of woman to sing the Magnificat over Christ in the womb, then I imagine, as a good mom does, she helped raise her son to be the one who will weep for the human race.