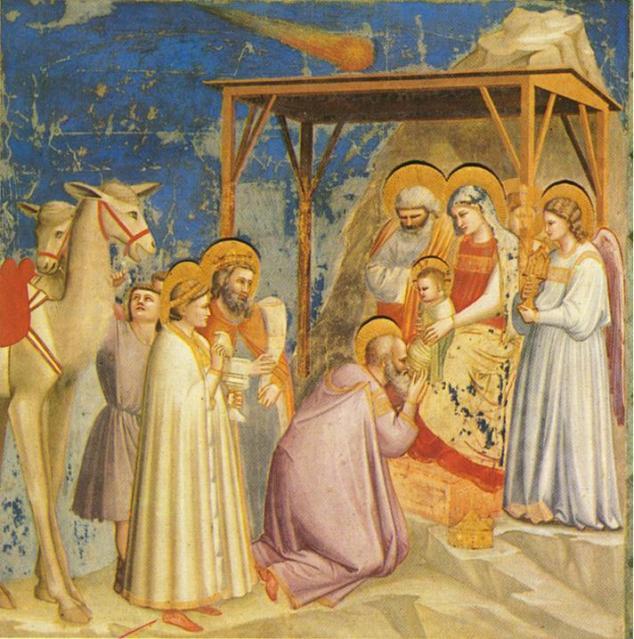 John Henry Hopkins Jr (1820 – 1891) wrote the carol, which we often title, “We Three Kings.” It celebrates the visit of the Magi. Each sings a verse as they present their gifts. This is the chorus:

The star is a well-known symbol for Christmas. We see it on Christmas cards, in Nativity scenes, in art, as decorations and as Christmas tree hangings. The rays of the star shine out in the form of a cross. It is pretty easy to recognize. I think it tells us something significant about the character of God.

We know about the star because Matthew records the visit of the Magi (2:1-12). They were Persian scholar astrologers who were mainly or all Zoroastrian priests. They came to Jerusalem wanting to know from Herod where the new-born king was, causing quite a stir (v 3). Herod assembled the chief priests and scribes to enquire of them where they should look for a king of the Jews (v 4). From Micah 5:2, they could confidently say, “Bethlehem” (v 5-6). The Magi went off to find him, but no-one else did. Herod, the chief priests, the scribes, and the people of Jerusalem did not go with them.

In light of the warnings of the Law, the Jews were very leery of looking for signs in the stars (Deut. 18:10-12, Isa. 47:13-14, Jer. 10:2-3). The star definitely wasn’t for them! Clearly, they didn’t think much of the sign either since they didn’t join the Magi in their quest. One thing is sure, if anyone set the star in the sky, it was God. Obviously, no-one else put it there! But who was it for?

Just about the only people who would even have noticed the star were the Magi. If ordinary people had seen the star, they would not know it was particularly unusual. Like me they would probably simply have enjoyed its beauty. The only possible conclusion we can draw is that star must have been put there for them. God sent them a sign. In spite of his severe warnings to Israel about omens and divination, he made a special effort to reveal himself. Magi were not cheap diviners whose intent was to predict fortunes. They studied the sky as respected scholars who took their profession seriously. God reached out to them – to gentiles, to a group of scholars who searched the heavens for omens, to followers of a very different religion! He did so in a way that only they would understand. Their response speaks for itself. They saddled up their camels, gathered expensive gifts, travelled for weeks through the arid Middle East to come and worship the special king whose star they had seen.

This is quite the contrast to the response of the religious and political leaders in Jerusalem, who couldn’t be bothered to travel the 6 Km to Bethlehem to see for themselves. The same God who laid aside his glory to become human also made sure he communicated it to the world, even in a way he usually did not condone. He reached far beyond his chosen people to reveal himself and to proclaim the universal significance of the child that was born. O star of wonder, … guide us to thy perfect light!

In His grace,
Fr. Geoff

Art: "Adoration of the Magi" by Giotto di Bondone